If you haven’t heard of Jeff Goins’ new book, Wrecked…..you really need to check it out.  He has editorial reviews from people like Jon Acuff, Pete Wilson, and Patsy Clairmont.  You can follow him on Twitter at @JeffGoins.  His blog is very much worth the read.  Recently, I had the opportunity to ask Jeff a few questions that would eventually be featured in his online ‘Wrecked Book Tour.’  Here’s the interview : 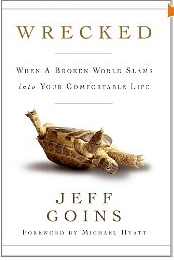 Me:  What are your personal priorities in life…in order?  (health, family, writing, God, rest, etc.)
Jeff:  God, self, family, work.  I almost put myself first, but the truth is I often don’t know what I need or even want. My relationship with God helps me understand what really matters — and what doesn’t. After that, if I’m not taking care of myself — spiritually, emotionally, and physically — everything else falls apart. This doesn’t mean that my family doesn’t take precedence over certain personal interests, but it does mean I try to spend some time alone every day, because it ultimately affects everything I do.
Me:  If you wrote a book that became a New York Times best-seller, would you prefer it to be fiction or non-fiction?  Why?
Jeff:  Non-fiction.  I haven’t dabbled much in fiction.
Me:  What would you say your specific purpose as an author is?
Jeff:  I want to inspire people to live out their callings. I believe everyone is given a purpose in life, and helping people find it is an honor.
Me:  Since the release of Wrecked, what is one of the most meaningful responses you have received?
Jeff:  I love that Wrecked has reached people of all audiences. Two recent events have been really gratifying. First, an atheist read the book, and it really spoke to him. As you know, there are some faith-based themes in the book (as a Christian, I don’t shy away from my beliefs but also want to dialogue with people who don’t share those beliefs), and it’s fun to hear that I’m doing more than “preaching to the choir.” Second, there is a line towards the end of the book that honestly felt like a bit of a throwaway line when I wrote it. Basically, I say you can live a radical life, whether you’re a missionary in Africa or raising five kids in Oklahoma. I received an email from a man who had served overseas as a missionary for several years and now was raising five kids in Oklahoma; he said he cried when he read that line.
Me:  Do you have a mentor/life coach in your life right now, and if so…what does that relationship look like?
Jeff:  I have a mentors. My boss is one and has been for six years now. We chat on the phone (about non-work stuff) pretty regularly (although, it’s been less frequent now that life has gotten more hectic), and he coaches me. Early on in that relationship, he told me it would be up to me to maintain the mentorship, and that idea has stuck with me ever since. I also have a few men in my life that I get together with every other month for coffee/lunch. Again, I understand that it’s my responsibility to maintain these relationships; these are busy men, and if I want their time, I need to work around their schedules. Of course, they’re extremely generous, and because of their generosity, I try to make it easy for them. I think a lot of young people don’t understand this about mentorship — that it’s not up to the teacher, but rather the student to do the work — and I wish they would. I had to learn it the hard way.
There you have it.  So, if you have read (or are reading) ‘Wrecked,’ what did you think?  What would you ask Jeff if you had the opportunity?